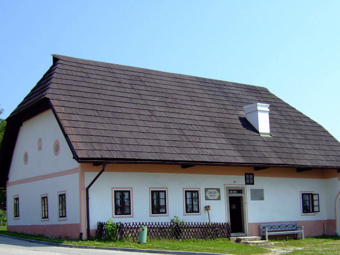 Adalbert Stifter (October 23, 1805 Horní Planá [1] – January 28, 1868 Linz) was a Czech-Austrian writer, painter and pedagogue. He is one of the most important representatives of the Biedermeier. It is still relevant today for its critique of heightened relations between nations and its relationship to Šumava nature.

Thanks to his exemplary attitudes in relations between the Czech and German populations of the Czech Crown, the association of Adalbert Stifter was named after him, which deals with the support of Czech-German understanding.

Adalbert Stifter was born on October 23, 1805 as the eldest son of the weaver Johann Stifter and his wife Magdalena in Horní Planá nad Vltavou (Šumava), originally with the name Albert. After his father died in an accident in 1817, his mother raised him. By working on his grandfather’s farm on the father’s side, Augustine Stifter helped to improve family conditions. Father Adalbert’s death shook him so much that he refused to accept it as a fact and went on a hunger strike for two days. In 1818, his grandfather Franz Friepes (on his mother’s side) sent him to a Latin school against his will. In 1820, his mother married the baker Ferdinand Mayer. In 1825, Stifter suffered from smallpox.

Until 1826, Stifter attended the Latin Benedictine School in Kremsmünster. During this period, which he later described as the most beautiful period of his life, a feeling for nature, literature and art is born in him. In the Latin school he was called “Stifter Adalbertus, Bohemus Oberplanensis” in translation: “Adalbert Stifter Čech Hornoplanský”. He finished school with excellent results. He continues his law studies at the University of Vienna. He is interested in physics, languages ​​and philosophy. He finances his studies as a private teacher (he has a strong pedagogical talent, but never finds a permanent teaching position). Thanks to this work, he also gets to know his first love, Fanny Greipel. However, her parents end the relationship due to Stifter’s innate lethargy and inability to find a firm place. In 1832 he meets Amalia Mohauptová, the daughter of an officer from Kyjov in Moravia. He is also graduating in Vienna this year.

From 1833 to 1848 he made a living partly as a painter, partly as a writer. His first short stories were written then. After marrying Amalia (who was a seamstress) in 1837, the couple remained childless for a long time, which Stifter found hard to bear. They both took care of Amalia’s niece Juliana. He traveled with his Stifter family to his native village, also to Munich and Linz. His novel Late Summer (Der Nachsommer) was published. From 1841 he worked again as a home teacher. From 1843 to 1846, for example, he taught Richard, the son of the Austrian Chancellor of Klemens, Václav Metternich, at Kynžvart Castle.

The revolutionary year of 1848 hit Stifter hard with his ideas. Later, however, he is disappointed, withdraws into seclusion, and remains conservative for the rest of his life. Natural motifs appear in his work. In 1850, the school board became an Upper Austrian school inspector with the title of c. And k. And with an annual income of 1,500 gold coins.

Stifter is working on the historical novel Vítek (Witiko), three parts of which are gradually being published during the 1960s. During work, he develops health problems. On January 26, 1868, he apparently attempted suicide due to his deteriorating health. He lies in a coma until January 28, when he dies.