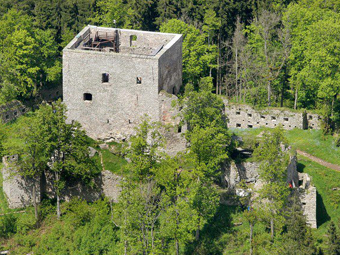 Vítek’s stone is located above the settlement of Svatý Tomáš u Přední Vítoně about 43 km from the DaJa guest house.

Vítek’s stone (also Vítkův hrádek, German Wittigstein or Wittinghausen) is a ruin of a Gothic castle on the top of the mountain of the same name on the right bank of the Lipno dam in the Český Krumlov district. The ruins stand above the settlement of Svatý Tomáš, about five kilometers from Přední Výton. It is the highest castle (or ruin) in the Czech Republic (1035 m above sea level). It has been protected as a cultural monument of the Czech Republic since 1958.

Vítek’s stone became an inspiration for various painters and writers. It is one of the main venues of Stifter’s historical novel Vítek (Witiko). The poet Adolf Heyduk also found inspiration here and used it in his tragic poem Pod Vítkový kamenem.