Skating on the lake 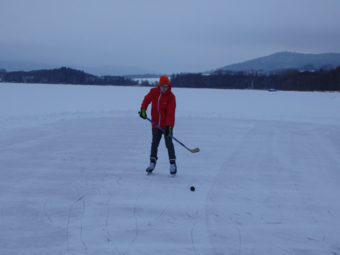 You can enjoy your skates properly on a really frozen lake.

Lipno freezes mostly in December and you can skate until the end of February.
Modified ice for skating can be found in Lipno nad Vltavou and Horní Planá.
In other localities, skating on the lake is an unofficial activity, so nowhere will you know with a guarantee that the ice is strong and safe enough.
At present, there are two maintained routes in Lipno:
1. Horní Planá, Pihlov and Horní Planá Hůrka
2. Lipno nad Vltavou, Frymburk, Přední Výtoň
Lipno thus became the largest ice rink in the Czech Republic – skates to Lipno with you.
Cycling on the frozen surface of Lipno is also becoming popular (because the ice is covered with a thin layer of snow, cycling is possible without any problems).
Always step on the ice at your own risk!
Do not go skating alone, skate near the shore and, if possible, where locals who know the location well go.
However, in very severe frosts, the ice is so strong that even cars can shorten their journey and you can make a safe trip over long distances (a favorite is, for example, from Černá v Pošumaví to Pláž in Horní Planá).