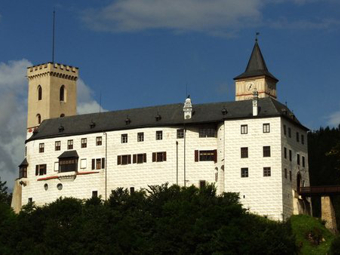 Rožmberk Castle is 53 km from DaJa

Rožmberk (German: Rosenberg) is a castle in Rožmberk nad Vltavou in the district of Český Krumlov, in the South Bohemian Region, as the crow flies only 6 km from the border with Austria. It is the oldest seat of the Rosenbergs. It is currently state-owned and administered by the National Monuments Institute; is open to the public.

The castle and its founder, Vok I. of Rožmberk (+ 1262), are first mentioned in writing in 1250. In 1259, Vok I. also founded a nearby Cistercian monastery in Vyšší Brod. Until 1302, Rožmberk was the main seat of the leading Czech aristocratic Rožmberk family. Even after they moved to Krumlov, which they acquired from the lords of Krumlov, the Rosenbergs developed this castle. In 1522, part of the town and the Upper Castle burned down, to this day only the tower of Jakobínek has been preserved. In 1597/1598, Petr Vok of Rožmberk (1539-1611) ceded the castle to his nephew Jan Zrinský of Seryn (1565 / 1566-1612). After his death in 1612, the castle and manor were acquired by the Švamberks according to the Rosenberg-Swamberk Agreement of 1484. Petr of Švamberk (+ 1620) became one of the thirty members of the estate directorate in 1618, so his property was confiscated. Already in 1619 the castle was besieged and conquered by the imperial general Karel Bonaventura Buquoy (1571-1621), to whom emperor Ferdinand II. the castle and manor were donated as compensation for the financing of the army and which was made famous by the Battle of White Mountain (1620). A note from February 1620 also gave him the Novohradské and Libějovické estates, as well as Žumberk and Cuknštejn. Karel Bonaventura and his wife Maria Magdalena of Biglia (1573–1653) are commemorated by the coat of arms above the gate of the Lower Castle, which was installed in 1621. Other fundamental changes in the castle took place under Jiří Jan Buquoy (1814-1882), who had the castle repaired and rebuilt in neo-Gothic style into a family museum in the years 1851-1857. The castle remained in Buquoy’s hands until 1945, when it was nationalized on the basis of Beneš’s decrees.