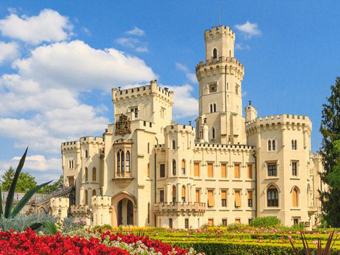 Hluboká Castle was originally founded as a guard castle in the middle of the 13th century by Czech kings and was often pledged as royal property. Several aristocratic families took turns here. Among the important ones were, for example, the Pernštejns, who founded the nearby Bezdrev pond in 1490, the second largest in Bohemia. An important aristocratic family of lords from Hradec bought the Hluboká estate in 1561. Two years later, the new owners had the original Gothic castle converted into a Renaissance chateau. At the end of the 16th century. Another owner of the estate was the Malovce family from Malovice, but as Protestants they lost their property in 1619 and four years later he acquired the estate from Emperor Ferdinand II as compensation for war claims. Habsburg Spanish General Don Baltazar de Marradas. Jan Adolf I. Schwarzenberg bought Hluboka from his nephew in 1661. The Schwarzenbergs stayed in Hluboká until the end of 1939, when the last owner Dr. Adolf emigrated overseas from the Nazis. Lex Schwarzenberg definitively lost their property by a special law in 1947. Thanks to very well managed property and extensive economic activities, Schwarzenbergs rebuilt the Hluboká chateau twice, first in the early 18th century in the Baroque style. 1840 – 1871 including landscaping of the park and the surrounding landscape. It was rebuilt under the influence of the roads of the then owner, Prince John Adolf II. Schwarzenberg and his wife Princess Eleonora, b. Princess Liechtenstein, to England. The main model of the project was the Royal Castle of Windsor. The reconstruction was started according to the plans of the Viennese architect Franz Beer, after his death the Schwarzenberg builder Damasius Deworetzky continued to design the magnificent interiors.