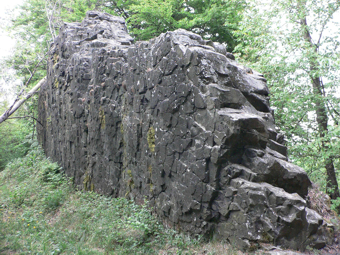 Devil’s Wall is located between Loučovice and Vyšší Brod about 39 km from the pension DaJa.

Devil’s Wall is a national nature reserve with an area of ​​140 ha located along the section of the Vltava River between Loučovice and Vyšší Brod. It was established in 1992 by merging the state nature reserves Čertova stěna (founded in 1956 on the right bank of the river, area 10 ha) and Luč (founded in 1934 on the left bank of the river, area 95 ha). The reservation was expanded in 2005 in the area of ​​the right bank and the Vltava river between its own rocky sea and Loučovice was also included in it.

The top of Čertova stěna is accessible from the car park at the junction of Vyšší Brod and Loučovice (entry further into the rocky sea is prohibited), two tourist signs pass through the reservation, a cycle path and the Lipno-Rybník railway line (there is a Čertova stěna stop near the reservation). During the construction of the cycle path in 1999, a dispute was resolved to prevent cyclists from entering the inner, more valuable parts of the reserve. the fence was built across the forest-like part of the reservation, where human intervention is excluded).

From the rock garden near the top of Luče (933 m, accessible by the blue sign from Loučovice) there is a beautiful view of the entire adjacent Vltava valley, the Devil’s Wall and also part of Lipno.