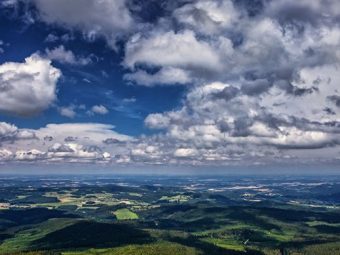 Boubín (1362 m above sea level) (German Kubani, Kubany) is a mountain in the Boubínská hornatina, the fifth highest peak in the Czech part of the Šumava and the third highest in the South Bohemian Region. It is the 16th highest mountain located within the territory of the Czech Republic (ie outside the state border) and the highest such mountain in Šumava and the South Bohemian Region. It is located 3.5 km east of Kubova Huta, the top part belongs to the cadastral area Včelná pod Boubínem, part of the village Buk (district Prachatice). The round massif of Boubín together with the sharply shaped Bobík (1264 m above sea level) forms a characteristic silhouette of the Šumava, visible even from very distant places. The Boubín massif is mainly formed by Moldanubian rocks – migmatites and pararules.

The age of the Boubín Forest is estimated at 12,000 years, and in the past the forest and the mountain had many uses. In the 19th century, Boubín was used mainly for rafting wood and smuggling paths led here. In 1833, a floating reservoir on the Kaplický brook called Boubínské jezírko was built on the southern slope of Boubín (2 km from the top, at an altitude of 925 m) to allow timber from the Boubín forests to the glassworks in Lenora. [4] It still served its purpose in 1957. The main credit for the declaration of the Boubín Forest in 1858 was the Schwarzenberg forester Josef John [5], in whose honor a monument was erected on Srní vrch (1 km west of the Boubín peak, at an altitude of 1296 m). John’s stone marking the tri-border of three former woods – Zátoň, Kubova Huť and Včelná.

Since November 2004, a wooden lookout tower, 21 m high, has been rebuilt at the top, offering an excellent view of the entire Šumava panorama (Libín, Kleť, Chlum, Bobík, Smrčina, Plechý, Stožec, Třístoličník, Luzný, Černá hora, Poledník) on one side and to the interior of Bohemia (Vimperk, Brdy, NPP Temelín, Hluboká nad Vltavou) on the other side. The Alps (eg Dachstein) can be seen with good visibility. It is the second highest lookout tower in the Czech Republic and the highest lookout tower in the South Bohemian Region.

After a wooden staircase (109 steps) located in the axis of the tower, the tourist gets to the gallery, located on the seventh floor. The tower is 7 × 7 m wide at the base and in the top part it narrows to a width of 4 × 4 m. The lookout tower is freely accessible. The construction of the lookout tower began in July 2004, cost a total of about 3 million crowns and was carried out by SMP Construction. According to the conditions of the building permit, no heavy machinery was allowed to be used during the construction, so 60 tons of building material were gradually transported to the top of Boubín by hand, cable car or horses. The lookout tower was inaugurated in May 2005.

Wooden walkway leading to the top of Boubín since 2006
Boubín is accessible from several directions. The shortest way (5 km) to the top leads from Kubova Hut following the blue sign. A red sign from Vimperk, a yellow sign from Šumavské Hoštice via Včelná pod Boubínem, a red sign from Volar and a blue sign from Lenora via Zátoň also lead to Boubín. In response to the opening of the lookout tower, the Šumava National Park and Protected Landscape Area Administration temporarily closed the access roads to the top of Boubín to the only temporary route in the first half of 2005. In August 2005, the road was reopened in the section of the crossroads Na křížkách – the top of Boubín, along which the red sign from Volar and the blue from Lenora lead together. The final sections of the remaining three hiking trails remained closed. The blue sign from Kubova Huta turns under Johnový kamen on a replacement green marked route, which leads along a forest road and the trails from Vimperk and Šumavské Hoštice also connect to it. In 2006, the end of the ascent road to Boubín was transformed into a wooden sidewalk with a railing.

Memorial granite obelisk.
On the top plateau there is a protected trigonometric point of the 1st order and a memorial granite obelisk with the inscription “Cardinal Friedrich Fürst von Schwarzenberg 3 August 1867” commemorating the visit of the then Archbishop of Prague.
1.2 km southeast of the peak, at an altitude of 1135 m, on Lukenská road there is a place called Křížová smrč. It is a stone monument reminiscent of the “Cross Spruce” tree, which stood here until 1895 (it was 395 years old and 57.72 m high). The triangular stone column standing in its place also resembles a geographical point where the former beehive, Zátoň and Mlynařovice forests meet.